JF-105B at Lackland AFB, crew behind aircraft is finishing paint. Dog by left gear making sure we didn;t get too close. 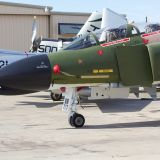 Garrett Helleril y a environ 12 mois
Appears to be the test bed Thud for the purposed RF-105. Great to see this air frame still exist and is being cared for at Lackland
Report

cliff731il y a environ 12 mois
Garrett Heller - you are exactly right! This Republic Thunderchief was originally ordered as a RF-105B but was reassigned the JF-105B designation for use as a test aircraft.

Wikipedia's online information confirms there were only three (3) JF-105B airframes built by Republic...

This Thunderchief at Lackland AFB is indeed a rare bird!
Report